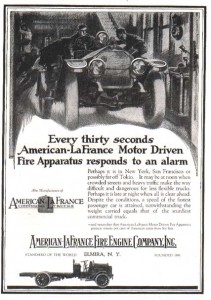 When Hose Company No. 2 meets next Tuesday evening, the members will undoubtably have their first view of the splendid new apparatus of the company which has been on its way from the factory for over a week. This fine motor, the very last word in fire fighting machinery, will replace the old steam engine and hose wagon which have rendered such valuable service during the past few years, but which are now regarded as practically obsolete. With the new installation Larchmont will be able to maintain the high position which she has long held among those villages which are proud of their fire protection, and whose population know that sense of security which only a thoroughly efficient fire department can give.

High grade apparatus alone does not make an efficient department, and Larchmont has for many years been noted for its loyal, zealous, and well-drilled firemen, in both the paid and volunteer branches of the service. However, of late there has been a noticeable falling off in attendance among the volunteers at meetings and drills, and this fact has been somewhat disturbing to the Fire Council and the officers of the various companies. The only outstanding reason for this seems to be that there have been so few fires of late, (knock wood) that some volunteers have lost interest in the work. This is a condition which cannot long be endured, and the officers of the department are determined to correct it at once. It is pointed out that the law requires reasonably regular attendance at both meetings and drills, and they are actually as important as fighting at an actual fire. The quotas of all the companies are full, and a member who does not attend regularly simply stands in the way of some good man who is ready to serve, but for whom there is not a place.

When the fire alarm sounds, men with poor attendance records at meetings and drills are frequently among the first to arrive, but they are only a source of embarrassment to their officers. A few well drilled men are invaluable at a fire, but one inexperienced man may well jeopardize both life and property.

Chief Towle and his assistants have planned and carried out a number of departmental drills during the past years, and they have proven of great value and interest to those who have participate in them. To may outsiders who have watched these drills they have appeared rather tame and without bustle and excitement. But the aim has been less to provide a physical drill than one of education to plan just how to fight a fire at a given place under various circumstances. The officers and many of the men now understand the conditions surrounding most of the larger buildings in Larchmont, and know exactly how to attack a fire at these points. The value of this work was strikingly shown last spring when a serious fire was prevented by strict adherence to a prearranged plan.

In the Hose Company, Captain Boschen and former Captain Dolan arranged a series of squad drills last year, which brought the company to a high state of efficiency. They were carried out under the direction of E. M. Dalley, who made them so interesting that the men were sorry when a series of competitions among the squads brought them to a close. A complete course of instruction was given, beginning with the name, the use, and the exact location on the apparatus of every appliance, and ending with complete drills on the streets when all of the resource of the company were brought into action. The men learned that orderly procedure puts out more fires than excitement. They found that there are a thousand things that a fireman must not do at a fire, and just one thing that he must do – obey orders. They learned that a man improperly clad is useless as a fireman, and that one arriving breathless at a fire is easy prey for smoke and gas. In short, they found that fire fighting is not a haphazard frolic, but serious business involving life and property, and only to be undertaken by skilled men.

And so, with the arrival of the new apparatus, the Hose Company must again begin its instruction and drill for both the new and the old members of the company. Meanwhile a special effort is being made by the officers of the Fire Department to bring the attendance at meetings and drills of all of the companies up to the maximum, to the end that Larchmont’s Fire Department may continue to be as it always has been, the pride and protector of the community.