1923: The apparatus goes into service with the Hose Company.

1938: The apparatus is rebuilt and goes into service with the Engine Company. 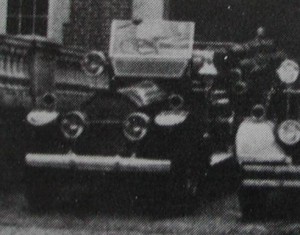 Engine One in 1941 at Village Hall

1947: Engine One is retired and sold to collectors in upstate New York.

1950s: Engine One is sold to a Fire Apparatus Museum in Seattle, Washington

1970s: Engine One is purchased by Richard Cooper for his personal collection.

2002: The volunteer companies of LFD acquire Engine One from the family of Richard Cooper after his death.

2007: The companies donate Engine One to the Larchmont Historical Society, which establishes the LHS Fire History Committee to undertake a restoration and to develop a program for ongoing maintenance and display of the engine.

2009: Larchmonters generously send the 87-year old engine off to Maine for restoration.

2012: Firefly Restorations of Hope, Maine finishes its work, and Engine One returns to Larchmont.