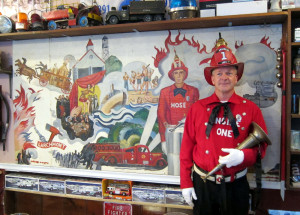 Rich Hargrave in the Historical Fire Company uniform, in front of the Hose Company mural featuring their uniform inspired by the Fire Zoaves.

The ceremonial and marching uniforms for the Larchmont Historical Fire Company are based on the Civil War uniforms of the Eleventh New York Volunteer Infantry, or “First Fire Zouaves.” The infantry was commanded by Charles McKnight Leoser after the Battle of Bull Run, who later resided in the Larchmont Manor House as publisher of Bonfort’s Wine and Spirits.

During the mid-20th century, the Larchmont Fire Department Hose Company, adopted a uniform also inspired by the Fire Zoaves. This was the inspiration for the Historical Fire Company’s decision to base their uniforms on the Fire Zoaves. 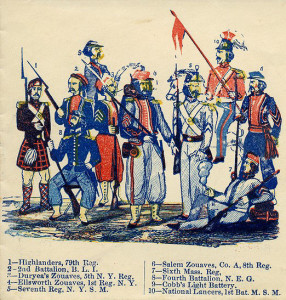 The original Fire Zoave uniform in the center.

With the guidance of historical uniform expert Becky Benton, we designed a uniform that combines a red jacket, white spats, and a leather belt that closely hatches the Hose Company belts.