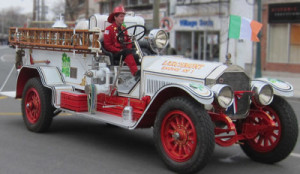 PJ Abrahamsen drives a restored Engine One down Mamaroneck Avenue

The Larchmont Fire Department sold the pumper in 1947, but in 2002, its volunteer fire companies together repurchased it from a Seattle, Washington family. In 2007, the companies donated the pumper and other memorabilia to the Larchmont Historical Society. At the same time, the family of Jacob Orans donated $75,000 in his memory to aid in the restoration of the vehicle.

The Historical Fire Company conducted research, raised additional funds, hired a contractor and oversaw the restoration of the pumper. In 2012, Firefly Restorations of Hope, Maine finished its work, and Engine One returned to Larchmont. 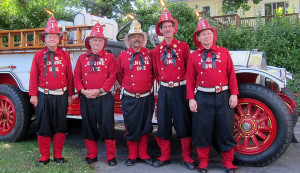 Since then, the Larchmont Historical Fire Company has continued to maintain and display the pumper at community functions and parades. Company members acquired uniforms based roughly on those worn in the Civil War era by the Fire “Zoaves.”  They march in parades with the pumper, dressed in bright red jackets, black slacks, white spats and red illuminated helmets.

The company has also developed the Engine One website as an archive of articles, photographs and documents related to the pumper and its service to the Village of Larchmont. 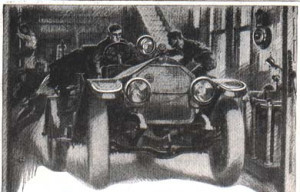 RENEWED INTEREST OF HOSE COMPANY MEMBERS ANTICIPATED WHEN NEW MACHINES ARRIVES – ATTENDANCE AT MEETINGS AND DRILLS URGED. From the Larchmonter Times, January 11, 1922 When Hose Company No. 2 meets next Tuesday evening, the members will undoubtably have their first view of the splendid new apparatus of the company which has been on its…

END_OF_DOCUMENT_TOKEN_TO_BE_REPLACED 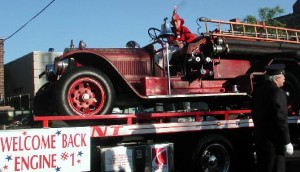 Reprinted from the Larchmont Gazette, May 2002. Larchmont Fire Engine One is back in Larchmont. The 1922 American LaFrance Pumper served Larchmont from 1922 to 1947, when it was sold off. On the death of its last owner, Seattle antique car collector Richard Cooper, the family contacted Larchmont’s Volunteer firefighters via Larchmont Online, the Village…

END_OF_DOCUMENT_TOKEN_TO_BE_REPLACED

The ceremonial and marching uniforms for the Larchmont Historical Fire Company are based on the Civil War uniforms of the Eleventh New York Volunteer Infantry, or “First Fire Zouaves.” The infantry was commanded by Charles McKnight Leoser after the Battle of Bull Run, who later resided in the Larchmont Manor House as publisher of Bonfort’s Wine…